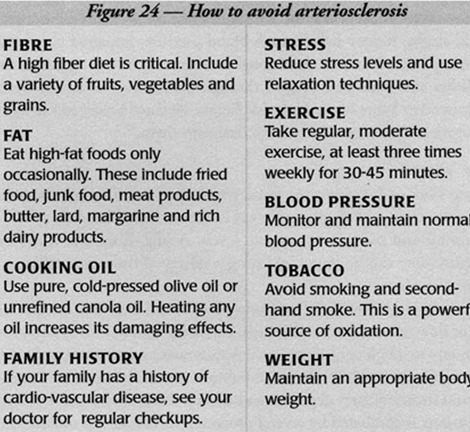 Heart disease and stroke are the main cause of death in North America. Both result from the same process —arteriosclerosis, also called atheroscle­rosis or hardening of the arteries. This is such a common disease in the developed world that it has been considered a normal part of the aging process.

In fact, overwhelming evidence links it closely to diet and life­style issues such as smoking and lack of exercise, suggesting that this major cause of mortality and morbidity is preventable, or that its progress may be slowed down or even reversed.

Although it is more common in older people, the early stage of this disease is sometimes found in children, and people in their thirties can suffer significant damage.

The consequences of arteriosclerosis are disastrous—heart failure, heart attack, stroke, kidney failure, high blood pressure, impaired circulation and many other ailments. Additional contributing factors aggravate this condition and must be managed throughout our lives to ensure health and longevity. Some of the high risk factors are listed below and in figure 24, together with suggested ways to deal with them. 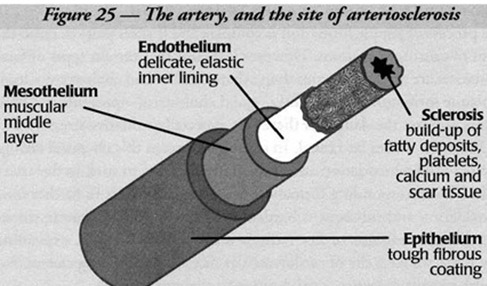 Dietary fiber adds bulk to the feces, which then pass through the intes­tines more easily, aiding normal bowel function. Low-fiber diets affect fat absorption and increase cholesterol levels. A high-fiber diet is critical. Adequate fiber can be found by eating a variety of fruits, vegetables and grains every day.

To understand how GSH can help prevent and treat this disease, let’s look at how arteriosclerosis develops. An artery wall has three layers (see figure 25) – a tough epithelium, a thick muscular mesothelium and a deli­cate endothelium.

The endothelial lining is especially prone to damage, and thin streaks of fatty deposits can build up there. In the healthy artery, this process is combated by several processes, including our natural anti‑oxidant defenses. In arteries damaged by high blood pressure, stress or cigarette smoking, these fatty deposits accumulate.

In an attempt to heal the damage, the body lays down platelets, calcium and scar tissue. Plaque thickens and makes the area stickier than normal, encouraging the accu­mulation of additional lipids. Slowly the artery becomes sufficiently clogged to inhibit blood flow, depriving organs and muscles of oxygen. 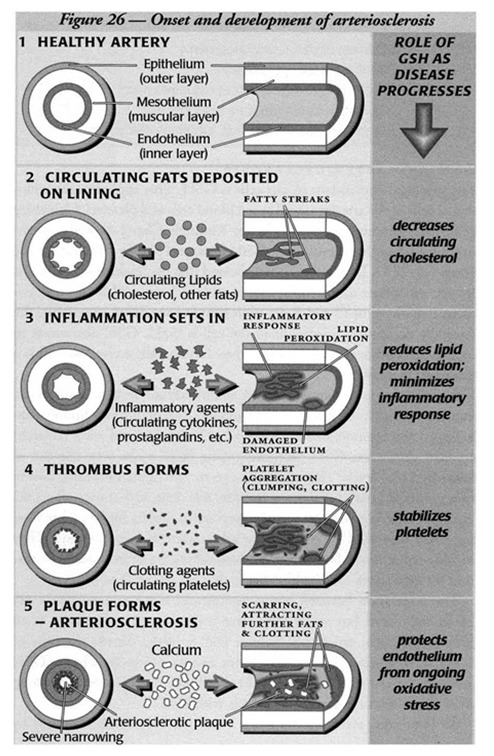 Poor circulation affects all organ systems including the brain, kidneys, eyes and extremities, but its main burden is heart disease. When blood flow to areas of the heart through the coronary arteries is cut off, a heart attack results.

The pain of angina comes from heart tissue that cannot get enough oxygen because of insufficient blood flow. A heart with poor blood flow weakens and leads to heart failure. Hardened arteries often lead to high blood pressure, which further compromises the heart.

A coronary bypass operation consists of a grafted vein that bypasses the blockage. Angioplasty is a way to squash plaque against the artery wall and make more room for blood to pass through.

A stroke is caused by blocked blood flow (ischemia) that deprives the brain of oxygen. All vital organs are prone to ischemia when arteries become narrow and hard. In these cases it is important to thin the blood and manage cholesterol levels.

Occasionally, surgery is performed to remove the buildup of plaque in the arteries leading to the brain. Both the deprivation of oxygen from brain tissue and its subsequent reintroduction (see reperfusion injury, below) cause significant damage.

Neurologists from the University of California (San Francisco) showed the importance of glutathione in protecting the brain from such attack. Animals whose glutathione levels were artificially lowered suffered significantly greater brain damage after a stroke.

Neurosurgeons at the University of Washington went further, demonstrating that glutathione depletion also leads to further narrowing of the critical arteries serving those oxygen-starved areas.

The process of plaque formation is complex and it takes years to reach the point of causing symptoms. However it is clear that certain types of fatty substances are more dangerous than others. LDL—bad cholesterol—leads to plaque formation, while HDL—good cholesterol—prevents it.

Other factors increase the danger of these fats, especially oxidative stress. Oxidation makes fat rancid. In our blood stream this chemical change is called lipid peroxidation and causes fatty deposits to stick to the artery walls. The corresponding formation of free radicals leads to further lipid peroxidation and subsequent hardening of the arteries.

Researchers have identified many causes of cardiovascular disease. The biochemical changes that result in oxidation of fat, especially LDL-cho­lesterol, are important. But researchers are also studying the chemicals involved in the associated inflammatory response, platelet function and cardiac muscle aging.

The new field of free-radical biology is revealing a greater than previously thought role for oxidative stress in cardiac disease. Thousands of published articles describe the role of oxidation in arterio­sclerosis and huge studies are underway to establish the role of vitamin and mineral supplementation in treating and preventing this disease.

An excellent article published by a combined team of Canadian and Japanese heart researchers reviewed evidence for the role of oxidative stress in acute ischemic heart disease. They suggest that the use of antioxidant therapy prior to procedures such as angioplasty, coronary bypass and thrombolysis may help prevent complications.

The principal antioxidant in our cells is GSH. This applies to the endo­thelial cells of the arteries as well as red blood cells and platelets. University of British Columbia researchers led by Kimberly Cheng showed the con­nection among cholesterol levels, GSH levels and plaque formation in the aorta.

L.L. Ji, D. Dillon and E. Wu showed that decreasing GSH levels as we age contribute to the formation of atherosclerosis. Although antioxi­dants like vitamins C and E are increasingly considered important, the naturally occurring antioxidant in the cell is GSH.

GSH also serves to recycle these other antioxidants into their functionally active form. This is described in chapter 1. In determining cardiovascular risk factors, certain tests or markers can indicate the risk or existence of heart disease. Two of these are lipoprotein-a (Lp[a]) and Homocysteine.

D. Gavish, J.L. Breslow and other research­ers have shown the GSH-promoting drug NAC to be very effective in lowering Lp[a] levels. They reported a 50 to 70% reduction using two to four grams of NAC per day—a considerable dose.

Other researchers us­ing more tolerable amounts were less successful at reducing Lp[a] but have suggested that NAC may influence atherosclerosis in other ways. They include reduction of bad cholesterol and inhibition of free radical forma­tion by monocytes—white blood cells that are attracted to platelets.

The association between homocysteine and GSH metabolism is still being elaborated but will clearly have important repercussions. In an influential review article J.S. Stamler and A. Slivka discuss the roles of GSH, its interaction with homocysteine and the protective effect of GSH on the vascular system.

The Swedes O. Wiklund, G. Fager and their group were able to lower homocysteine levels with NAC. An interesting article in the Japan Heart Journal described a study by A. Usal who measured the red blood cell glutathione of 21 patients with heart attacks and found evident glutathione depletion, indicating that this event presents a major demand for GSH.

In addition, increased GSH levels have been shown to improve reduction of overall cholesterol levels by raising the activity of the enzyme cholesterol hydroxylase.

X. Zhang and A.C. Beynen compared various proteins that reduce cholesterol in the blood and liver. Their results showed that whey proteins were more effective than other milk proteins or amino acid mixtures. The authors suggest that the lower cholesterol levels result from the inhibition of cholesterol synthesis in the liver.

Researchers have shown that selenium levels correlate well with levels of HDL (good) cholesterol. In a double-blind study, P.V. Luoma’s team was able to improve the ratio of good to bad cholesterol in healthy subjects by feeding them selenium supplements.

Selenium’s only biological activity takes place in the formation of glutathione peroxidase and it is through this action that selenium exerts its positive effects. The Italians G. Franceschini and J.P. Werba had similar success altering HDL/LDL ratios using NAC (N-acetylcysteine).

If a blood clot deprives tissue of blood and oxygen for more than a very brief period, its ability to produce life-giving energy is compromized. The immune system responds by building up neutrophils, a type of white blood cell, further compounding the damage by releasing even more products of oxidation.

When bypass surgery or thrombolytic drugs break down the clot and re-establish oxygen flow, the tissues are said to be “reperfused.” But when the fresh blood floods into the starved tissue, it responds with a surge of energy production that places exceptionally heavy oxidative stress on the tissue at the very time that its antioxidant resources have been depleted, paradoxically causing further damage. This condition is called reperfusion injury.

Pharmacologists such as K.S. Kilgore and B.R. Lucchesi from the University of Michigan long ago suggested the antioxidants should be administered alongside thromobolytic therapy.

Cardiologists at the University of Brescia in Italy have shown significant glutathione depletion after cardiac ischemia, and the ability of NAC to combat this depletion.

There are many other ways in which GSH protects blood vessels, but they exceed the scope of this book. They involve the role of GSH in maintain­ing smooth muscle tone in the vessel wall, the shifts and balance in sub­stances including prostaglandins, leukotrienes, thromboxanes, and plate­let factors. For more detailed information consult the references following this chapter.

Glutathione has been shown to diminish the oxidation of fats (lipid peroxidation), decrease circulating cholesterol, minimize the inflammatory response around arteriosclerotic plaque, stabilize platelets and protect the sensitive lining of the arteries. These are all important ways to combat hardening of the arteries and subsequent heart disease.

Glutathione also diminishes damage to oxygen-deprived tissue during ischemia, and also during the subsequent complications of reperfusion. Cardiovascular disease has had a huge impact on our population. It is to a great degree preventable, and strategies for raising GSH should go hand­-in-hand with a responsible diet and life-style. Such measures can prevent and may even help reverse this all-too common illness.